The rich merchant was about to set out for a journey to a far away land. He was searching for lavish goods far beyond the sea. Before he left he met with his three beautiful daughters to bid them farewell.

The two older daughters knew at once what they would like. The oldest daughter asked him to bring expensive dresses, and the younger daughter asked for golden rings, but unlike any at home. The youngest daughter, who was always quiet and gentle like a little lamb, was silent even now.

“Well, what can I bring you? Indeed, tell me!” urged her father.

“Oh, my dear father,” said the youngest daughter, “just return healthy and refreshed from your journey beyond the sea. I will be most grateful for that.” But her father did not want to leave without knowing what he should bring for her.

“Well, if it must be so,” she said at last, “let it be so. If you see three rose buds on a single stem, you can bring them to me. This will be the best present for me.”

Her older sisters ridiculed her because she asked for something that could be found at home. However, the father promised to bring her the gift of roses and took his leave.

As he traveled over the seas, he filled his ships with expensive goods. With his fortune he headed to his home country. He gazed at the expensive gifts for his two older daughters. He wanted to protect the gifts from any damage because they would create great joy at home. How grieved he was that he was bringing nothing for his youngest daughter! He had not found what she had asked for - three roses blooming from a single stem. Though he had searched and searched as if for a needle in a haystack, he had found nothing.

As fate would have it, everything would turn out differently. The merchant ships were not far from the coast where they should have docked. Suddenly, there was a violent thunderstorm! The vessels with the expensive goods were hurled and tossed about. The merchant was thrown from the ship with a plank onto a deserted coast. He was lucky to be able to collect his energy and to find safety in a deserted forest. The sea waves would have thrown him from the rocks back to the sea, as they battered the shore. Day and night he wandered through the deserted forest. For days the storm continued with lightning and thunder! Once with a flash of lightning, he saw a deserted castle and dragged himself there.

“Well, let it be, whether there is good or evil inside. I am going in. Otherwise I would perish.” He approached the gates where a guard stood, and he waited for the guard to call to him, but nothing happened. He came close to the guard but realized that it was stone. In fact, everything in the castle was like that, deserted and turned into stone. Darkness was everywhere, except in one room. He entered the room and saw a table spread for one person. A bed was made. As soon as he entered the room, a voice thundered through the window, “This is for your tiredness. Eat, drink, go to bed, and have a rest.” He looked around to see who could have said this, but there was no further sound. He treated himself, cared for himself, went to bed, and slept peacefully.

When the merchant woke up from his dreams, the sun beamed joyfully through the windows. The table was again set for him. He took some refreshment and set out to look for his host to thank, but everything was deserted and petrified.

A beautiful garden blooming with charming flowers stood in front of the castle. He hurried into the garden and tried to find the gardener. He strolled through the whole garden but found not a soul. He was about to leave, but a shrub of beautiful roses suddenly appeared in front of him. A thick stem rose in the middle of the shrub. Three thinner stems grew from it. A pink bud was on each stem.

“Oh,” he said to himself, “these are the three roses for my youngest daughter! If I am able to get home as poor as a beggar, I will fulfill the wish of at least one of my daughters.” So he tore off the stem with the three beautiful roses.

At that very moment, as if it had thundered, a voice roared behind his back. He looked and nearly fell to the ground. A huge beast stood in front of him, a bear with an open mouth. It put its paw on the merchant’s shoulder and thundered. “How could you take what is not yours? You will not leave this place alive.”

The terrified merchant scarcely stammered the reason he picked the three roses. “If it is so,” mumbles the bear, “If you have such a daughter, I will let you live. However, you must promise that you will give her to me as my wife in a week.”

If the merchant wanted to escape from the bear’s paws, he could do nothing but promise what he was asked, so he promised to give his youngest daughter to the bear as a wife.

The merchant arrived home safely. The two older daughters did not want to look at their father because he had returned as poor as a beggar. They had dreamed about rich presents from halfway around the world but they received nothing. Only the youngest daughter ran joyfully to meet her father. She welcomed him, kissed him and said, “I am grateful for the roses. I would have been grateful for anything you would have brought me. However, I am most grateful for your health and for your safe return, my dear father. It does not matter that we have become poor. We will not die because of that.”

The merchant saw his two older daughters glare at him and how they avoided him. He thought that he would lose his youngest daughter also. He became so sad that no words could express his grief. He wanted to tell her what troubled him, but he did not say anything. He thought that she would die of grief if she knew what a beast she had been promised to. The sadder he became, the more she comforted him.

The days of the week were passing quickly, and he would have to tell her the truth or he would soon die of grief. It could not be otherwise! When he explained everything to her, amazingly, she did not become frightened. She simply said, “Well, the bear is God’s creature too! Why could I not marry him? I caused the situation myself when I asked for those roses!”

The father was somewhat comforted, but the two older sisters ridiculed their youngest sister even now. They showed no sympathy to her—and all that for one vain stem of roses!

She did not worry about their taunting at all. She prepared her things and her father led her to the cursed castle. They waited one day, then another day, thinking that the bear would appear. But nothing happened! Her father left her there, thinking that she would meet somebody in this deserted castle. Se waited for meeting anyone in the deserted castle. She was treated with everything she desired for, but there was no living soul around. On the third day, she went to the garden and walked among the beautiful roses. Suddenly, thunder, and a huge bear stood in front of her. She was terrified! Her whole body shivered! But the bear spoke to her kindly, “Welcome, my darling, welcome. Will you live here with me?”

“Why shouldn’t I live here with you?’ she asked. “You are God’s creature too.” The bear led her around the garden and spoke graciously to her. Suddenly, there was the sound of thunder and the bear disappeared.

Each morning he reappeared and she walked with him in the garden. She did not realize that she had gotten used to being with him. In fact, she could not be without him.

But what happened? One day the bear did not appear. She looked for him everywhere, called him, but only the echo from the mountains answered her in this wasteland. The first day passed then the second one, and she began to feel lonely. On the third day, she searched every corner of the entire castle. There were just stone pillars! She walked through the garden, but there were only dead flowers!  She wanted to leave this place! At last she decided to take her leave from this place where she met the bear for the first time. As she came to the roses, she found the gracious bear lying there! He did not move! He did not breathe!

“Oh, my dear bear, what has happened to you? You were so good to me!” Crying, she said this over and over. Then she covered him with the roses, as if preparing for a funeral. “Truly,” she said, “I will not leave without kissing you at least once.” She kissed him and at that moment, it thundered terribly! The ground shook! Frightened, she did not know what had happened! 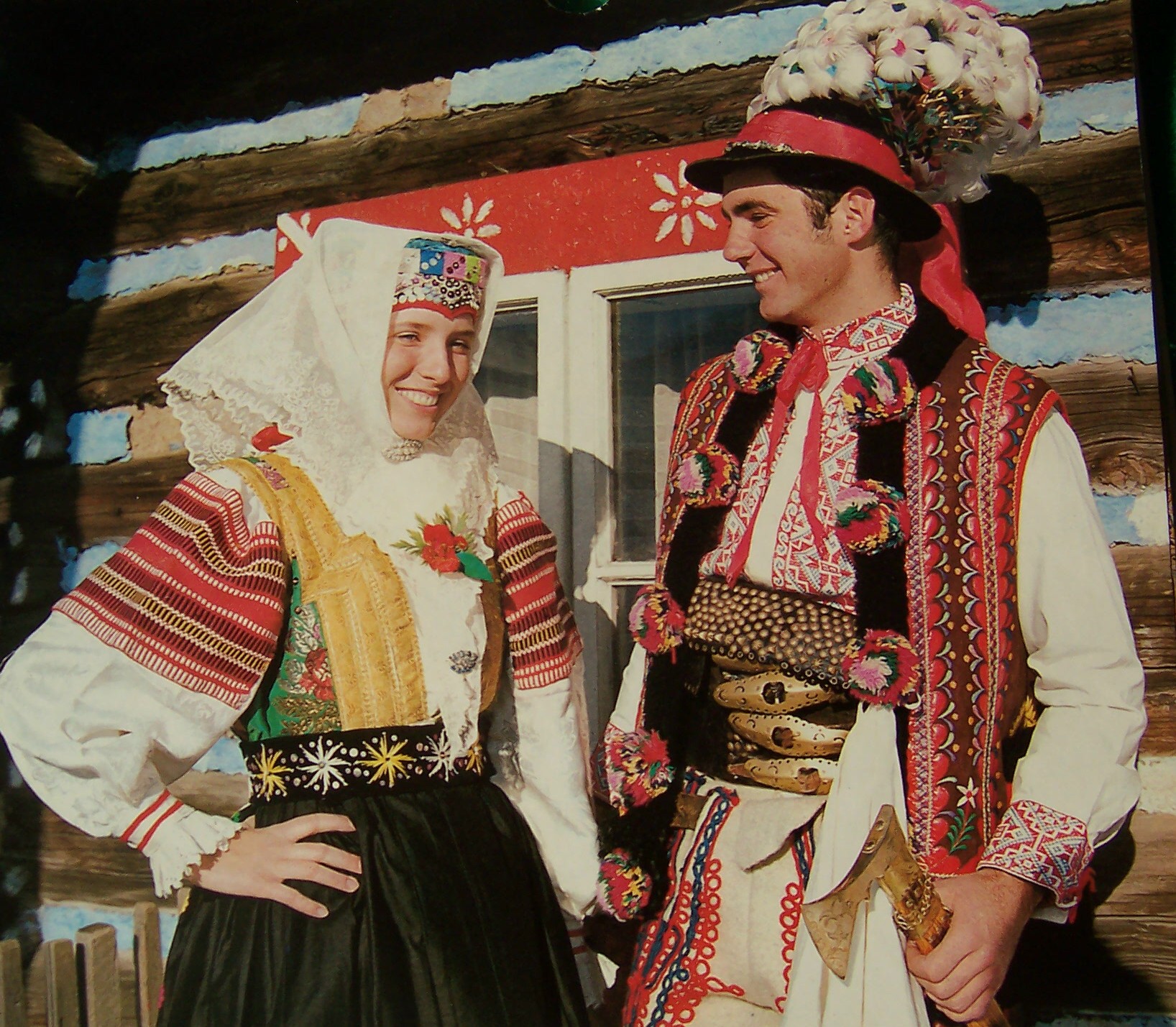 Eventually, she opened her eyes. A beautiful youth was standing before her! He said, “Do not be afraid, my dear. You have liberated me.” He told her how he was conjured into a bear and how all of his subjects were petrified. The curse was that a beautiful girl would free them all. The subjects, now alive, came from the castle to welcome them as their lord and lady.

Driven in a magnificent carriage, the young girl and the prince went to her father. The merchant was so happy that everything had turned out so well. The proud older sisters were angry and envious that their youngest sister with her simple gift of the roses would have such a beautiful husband!

Their wedding in the enchanted castle was filled with joy and gaiety for a long, long time!

This folk tale was told by Jozef Jančo and Zuzana Mydielková from the Liptov region and Amália Sirotková from Hájniky by the Hron River.

It can be found in the book Pavol Dobšinský: Slovak Folktales. Complied by Jana Babirátová-Judinyová and edited by Jean Sofranko-Olexy and Frances X Luther. This book can be ordered though Slovak Heritage Society of NEPA. Click on name of book.